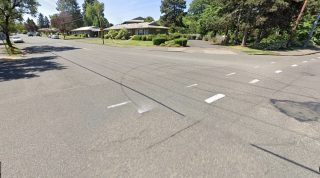 Fessenden wall and intersection before the project.

The City of Portland installed a mile of bike lanes and redesigned a wide intersection in St. Johns. The new cycle paths can be found on either side of a half-mile stretch of North Wall Avenue from Lombard to Fessenden. At the northern end of the wall in Fessenden, new median and sidewalk extensions have been constructed from ‘paint and post’ materials to improve the safety of all users, with an emphasis on non-conductors.

According to PBOT, the genesis of this project was a student who reported the intersection of Wall and Fessenden in the 2019 Traffic and Transportation Course, co-hosted by the City of Portland and Portland State University. Caroline Crisp (also a member of the Portland Bureau of Transportation’s Bicycle Advisory Committee) chose the intersection for her class project because she lives and rides in the area. “It’s so dangerous to walk across and it’s really scary,” she shared with the class during her presentation in December 2019. Crisp worked through his neighborhood association to make an official request repair and PBOT eventually agreed to not just deal with the intersection. , but add the cycle paths to Lombard.

The Wall and Fessenden intersection (above) is unusually wide with very wide turning radii (likely to make it easier to turn freight trucks and / or an old streetcar line) and measure over 100 feet from a corner to the other (see image on the right). It’s very wide for a residential neighborhood street. To limit this extent, PBOT lined a new pedestrian crossing and created two painted medians protected by plastic bollards. As you can see from the pictures, the new eastbound cycle path on Fessenden intersects these medians. This treatment significantly reduced the size of the intersection. If PBOT ever returns to fortifying paint and poles with concrete edging and planters, this once ‘spooky’ location could realize its potential as a safe and welcoming neighborhood gathering place!

One problem we (ran into BP reader Paul Buchanan while I was there) noticed about this intersection was the confusing nature of the northbound movement. When driving or cycling northbound on the wall as you approach Fessenden, you come to a stop sign, then a new marked pedestrian crossing, then the cycle lane stop bar, then to the general traffic lane. I don’t know if this was done on purpose to create indecision (and therefore slow people down), or if it was just the only way to make everything “work”. Whatever the reason, we found some confusion as to where to stop when drivers approach the intersection in cross traffic.

While the Fessenden intersection has a relatively rugged design, the cycle path on Wall to Lombard is notable for being the opposite. It’s a very standard design. I was surprised to see that in 2021, PBOT installed basic, unprotected, unbuffered, relatively narrow (felt like four to five feet) cycle lanes in the gates area. Before this project, Wall Avenue did not have a dedicated bicycle space, so this is an upgrade in this regard. PBOT has, however, added Star Wars themed heads to several bike lane characters!

While not as wide and protected as we would like, the new cycle path definitely improves the network. It’s a direct route and it connects to two existing cycle paths (on Fessenden and Lombard) and a neighborhood greenway (N Houghton, where PBOT has added a few extra plastic bollards and painted medians). North-south through roads are rare and valuable in this neighborhood due to a huge railway cut (just a block west of Wall) and diagonal development pattern. Other good north-south streets near Wall are Portsmouth (seven blocks east) and Buchanan (0.75 miles west).

The anemic cycle path is the result of a very cheap, (relatively) quick and opportunistic project that came together in-house – rather than having a big public awareness process and more planning and design work. full.

PBOT public information officer Dylan Rivera said the intersection works and the bike path cost only $ 10,000. It was funded by PBOT’s Missing Links program. This small program has been around for many years and is used for small, opportunistic cycling network completion projects often identified by PBOT staff or by public complaints. It is funded by an annual allowance of $ 150,000 in general transportation revenues (GTR, which comes from the state gasoline tax and revenues from local parking meters).

Of course, the Peninsula Crossing Trail is another north-south alternative in this region. Although this is a multi-use trail without a car, it does not connect to the road network or bike paths, and it crosses main streets halfway through the block. The other issue with the trail is that it has become the home of many campers over the past few years and many people feel unsafe on their bikes.

Watch this short video for another perspective on this project:

– Jonathan Maus: (503) 706-8804, @jonathan_maus on Twitter and [email protected]
– Receive our titles in your inbox.
– Support this independent community media with a one-off contribution or a monthly subscription.