A third tanker containing a cargo of Iranian oil bound for Lebanon docked at the Syrian port of Baniyas on Wednesday, an online oil shipment tracking service noted.

The service noted the Iranian-registered oil tanker Fortune had arrived in the port in northern Syria – the same mooring point for previous shipments.

Overland delivery via neighboring Syria violates US sanctions imposed on Tehran after then-President Donald Trump withdrew America from a nuclear deal between Iran and world powers in 2018.

The shipments are described as a victory for Hezbollah, which stepped in to supply fuel for its Iranian boss as the cash-strapped Lebanese government grapples with months-long fuel shortages that have crippled the country.

By registering, you accept the conditions

Lebanese Prime Minister Najib Mikati said the expeditions violate Lebanon’s sovereignty and are not approved by his government.

A convoy of tankers carrying Iranian diesel from the Syrian border to Lebanon arrives in the eastern city of al-Ain, Lebanon, on September 16, 2021. (AP Photo / Bilal Hussein)

Israel has said it will not interfere with the shipments.

Lebanon’s current economic crisis is rooted in decades of corruption and mismanagement by the ruling class and a sectarian political system that thrives on patronage and nepotism.

Severe fuel shortages have resulted in crippling blackouts and hours of waiting at gas stations.

Hezbollah chief Hassan Nasrallah announced in August that Iran was sending fuel to Lebanon to help ease the crisis. The first Iranian oil tanker ordered by Hezbollah arrived at the Syrian port of Baniyas in September and the diesel was unloaded at Syrian storage sites before being transported overland to Lebanon by tankers, where it was delivered. greeted with celebratory gunfire. 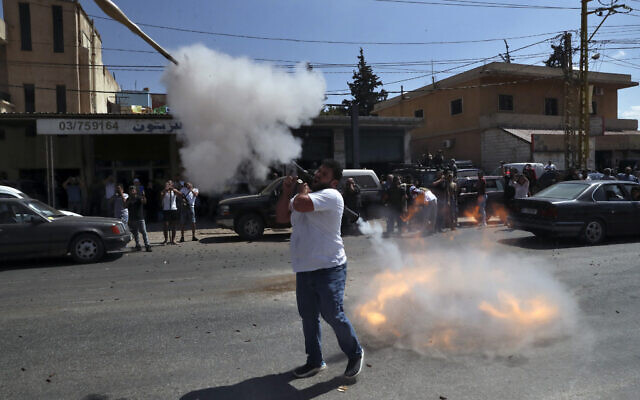 A Hezbollah supporter fires a rocket-propelled grenade into the air to celebrate the arrival of Iranian tankers in Lebanon, in the eastern city of Baalbek, Lebanon, on September 16, 2021. (AP Photo / Bilal Hussein)

Hezbollah, often accused of operating state within state, took part in the civil war in Syria alongside government forces. It operates its own crossing points along the Lebanese-Syrian border, far from official border posts.

Nasrallah said the tanker did not unload its cargo directly in Lebanon to avoid embarrassing authorities and risking sanctions against Lebanon.

While the oil delivery was seen as a victory for Hezbollah, the group faces growing internal criticism for increasingly drawing Lebanon into Iran’s orbit and for defending its resisting political allies. to change rather than pushing for reform.

Learn Hebrew in a fun and unique way

You get news from Israel … but do you TO HAVE this? Here is your chance to understand not only the big picture that we cover on these pages, but also the critical and juicy details of life in Israel.

In Streetwise Hebrew for the Times of Israel community, each month, we will learn several familiar Hebrew phrases around a common theme. These are small audio Hebrew lessons that we think you will really enjoy.

Already a member? Log in to no longer see this

Are you serious. We appreciate this!

We are really glad you read X Times of Israel Articles in the past month.

That’s why we come to work every day – to provide discerning readers like you with must-see coverage of Israel and the Jewish world.

So now we have a request. Unlike other media, we have not set up a paywall. But since the journalism we do is expensive, we invite readers for whom The Times of Israel has become important to help support our work by joining The Times of Israel community.

For as little as $ 6 per month, you can help support our quality journalism while benefiting from The Times of Israel WITHOUT ADVERTISING, as well as access to exclusive content reserved for members of the Times of Israel community.

Already a member? Log in to no longer see this